This is an ED theme for my favorite drama CD series, "Are you Alice?"  It usually started playing near the end of each "unbirthday scrap" CD when things got really dramatic.  It really gave the drama track endings some oomph.

As always, corrections are welcomed! 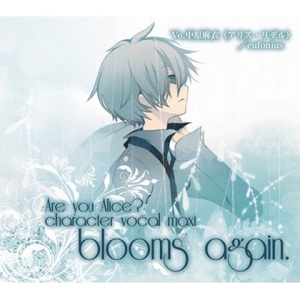 Just powering through all these translation attempts that I had started a long time ago but never finished... Hopefully someone with interest and of course better Japanese skills can find these one day and correct them ^^;

My "Are you Alice?" fever is still going strong.

I absolutely love the Cheshire Cat's charasong "smile a sweet smile," which started my whole AyA interest, but couldn't find the lyrics anywhere...So behold another one of my attempts at doing lyrics.  As usual, corrections are welcomed and appreciated.


TRANSLATION:
Breaking out of this small cage, I am, I am
Alone, I wonder what kinds of feelings will live in my chest

If my arms can be there to tightly hold you back,
then it would be okay if this useless face and legs
were to melt and disappear

I wonder if, at my words, your eyes will
look at me with a smile
I closed my eyes to sleep
The dream is still...

In that day that was left behind, I, I,
Like even now, I keep on wishing
so that

Your memories are inside of me, certainly
because of the happiness you gave to me with a smile
The night announcing the end
arrived, now...

We’ll be reborn on the morning of a distant day
Even if the fallen rain takes away
everything from us, it won’t matter
We’ll stand once more
because it was decided

The words of mine which you don’t know of
Since only one still remains
You were everything to me
Ah.....

After becoming familiar with “Are you Alice?”, and especially after listening to the “Unbirthday scrap #001” CD, this song has become a lot more meaningful and added more emotion to the Cheshire Cat’s relationship with Alice Liddel (the “real” Alice), as well as his relationship with the Duchess.

And now, for some overanalysis from me as well as supporting snippets.  [SPOILER ALERT!]

I am SO hooked on the "Are you Alice?" series right now.

Basically:
Alice is a guy, and apparently the 89th Alice to appear in Wonderland. He doesn't seem to remember his real name/purpose, so if he wants to keep the name "Alice", he must win the game of killing the White Rabbit. The Mad Hatter is a cool, gun-weilding badass who's ordered by the Queen of Hearts (also a male) to protect Alice during the game.  It's starting to hint that he has his own agenda and some kinda history with the previous Alice.  The Cheshire Cat...omg, the Cheshire Cat... so interesting...
Ehh, I'll just stop here because I don't wanna spoil anything.  Maybe I'll do another post when I've gotten further in the series.

It started just because I listened to the "Hello, I am IM Best" album and liked most of the songs.  ZIZZ Studio is awesoooome~!  My favorites were "Memories in the cup," sung in pretty good English(!) by Hirata Hiroaki -- and by "pretty good," I mean it's understandable with correct distinction between "R" and "L" sounds -- and "smile a sweet smile." sung by Inoue Kazuhiko.

Anyways, I was trying to translate "smile a sweet smile" and thought I'd try listening to the drama CDs to get some context...and ended up getting totally drawn into the story.  Not to mention that the main cast is love:

Alice: Sakurai Takahiro -->  Sakurai plays him well, but his character's cheekiness and emo moments gets on my nerves a bit ^^;
Mad Hatter: Hirata Hiroaki -->  Very aloof and intimidating...he sounds very cool, like a Sanji without the lady weakness.
Cheshire Cat: Inoue Kazuhiko --> Gosh, the Cheshire Cat has never sounded so good! ♥
White Rabbit : Morikubo Shoutarou --> I like how he acts out the White Rabbit's unstable scenes.  Somewhat creepy and very intense~!

Then I checked out the manga (which is still ongoing) and fell in love once again.  The art is GORGEOUUUUS <3  I'm looking forward to more chapters.

I thought the recent Tim Burton take on "Alice in Wonderland" was pretty dark, but this version seems just as dark, if not more.  Pretty twisted and lots of killing (for a fairy tale), with occassional light humor.  Something that interested me even more was the mystery.  It's pretty confusing in the beginning, but it keeps you wanting more and it's SO interesting when more clues start getting revealed.
Collapse